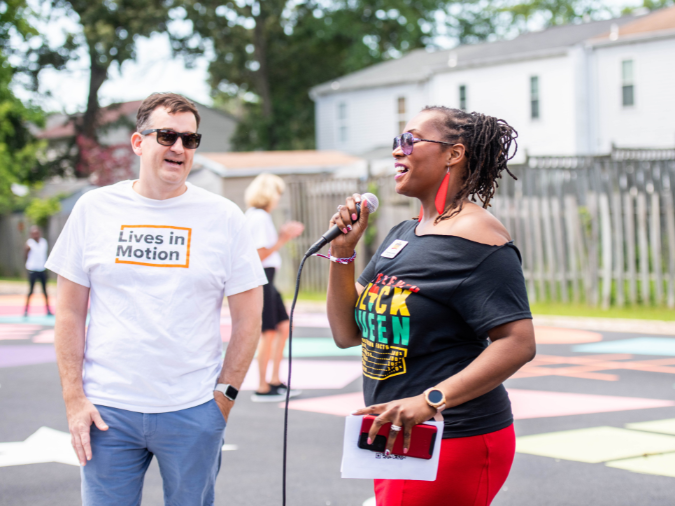 The Wills Group announced on June 29, 2022 that the Wills Group, community officials, and members of the Phoenix Park community dedicated the reimagined Phoenix Run Park in La Plata, Maryland on Saturday, June 18. The park transformation results from a shared vision and the collaborative efforts of local business, community advocates, and the Phoenix Park community who together reimagined what a once neglected park could offer a neighborhood, families, and the town of La Plata.

The Wills Group invested more than $130,000 to transform the park, supported by hundreds of volunteer hours across the Phoenix Park community and the Wills Group. Ruppert Landscaping, Federal Health, MJH Project, and Rowe Signs also contributed to the park transformation.

Major contributions to the park design and enhancements were also made by Stella’s Girls, the Dorchester Community Alliance, then Neighborhood Design Center and Keep La Plata Beautiful.

“The Wills Group is proud to be part of a collective effort to create a community space that is vibrant and welcoming for children and families,” said Julian B. (Blackie) Wills, III, President, and Chief Operating Officer of the Wills Group. “This project represents our renewed commitment to reimagining outdoor spaces with and for our local communities, and highlights what can happen when we work together to create what’s possible to strengthen our communities.”

The centerpiece of Phoenix Run Park is the new basketball courts with murals created by La Plata artist and founder of Three Ring Studio, Donald Ely, who worked with the Wills Group, community members, and partners to envision a renewed and vibrant space. The bright and vivid artwork celebrates the phoenix, symbolizing the re-emergence of positive energy and possibilities in the Phoenix Run community.

“My sincerest hope for this project is that it continues to bring ongoing happiness to this community,” said the mural artist, Donald Ely. “The mural design represents a renewed phoenix that rises up and celebrates the community.”

“The dedication ceremony marked the culmination of an amazing two-year journey with Dorchester Community Center, Stella’s Girls, Neighborhood Design Center, and the Wills Group,” said Kaprece James, Founder and CEO of Stella’s Girls. “We made a concerted effort to listen to the Phoenix Run community through focus groups and roundtables. They were the ones who told us what they wanted, and the Wills Group truly delivered.”

About the Wills Group, Inc.
Headquartered in La Plata, Maryland, the Wills Group has 277 retail locations across the Mid-Atlantic region, including Dash In, Splash In ECO Car Wash, and SMO Motor Fuels. A family-owned company since 1926 with expertise in convenience retailing, fuels marketing, and
commercial real estate, the Wills Group prides itself on keeping customers, employees, and communities’ Lives in Motion.