Dash In and Splash In ECO Car Wash Together Open Two All-New Locations in Clinton and Lanham, Maryland 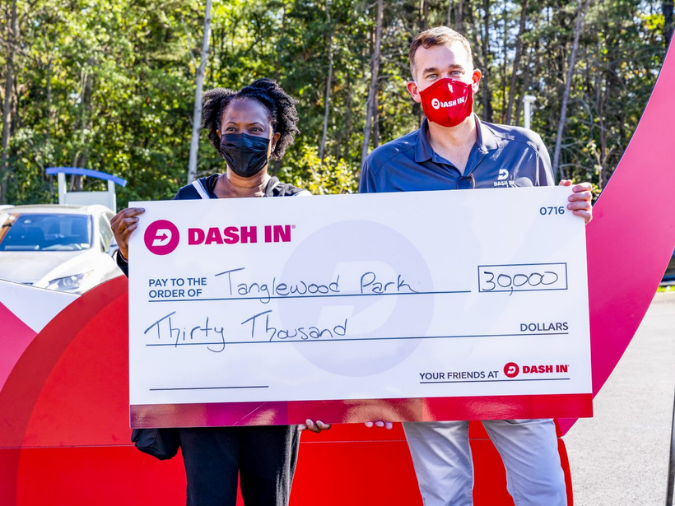 Dash In grand opening events introduce renewed approach by Dash In to celebrate each community with more than $40,000 in grants distributed in support of the Clinton and Lanham, Maryland communities; Dash In also revealed an expanded community outreach program – Enhancing Outdoor Spaces – with a $30,000 grant to Prince George’s County Department of Parks and Recreation to help improve Tanglewood Park in Clinton

Dash In, the growing chain of convenience stores throughout Maryland, Virginia, and Delaware, hosted grand openings at two all-new locations in Clinton and Lanham, MD. The grand opening events took place on Friday, September 10 and October 1, 2021, with each event followed by two successive weekends of special offers and opportunities to engage with each community.
The grand opening events also celebrated Dash In’s renewed commitment to community engagement with more than $40,000 in grants being distributed to the Capital Area Food Bank, Clinton and Lanham high schools, and to Prince George’s County Department of Parks and Recreation. This includes a $30,000 grant to help improve Tanglewood Park, which is a valuable outdoor space around the corner from the Clinton Dash In location.

While Dash In has a history of working to end childhood hunger, the Tanglewood Park grant is part of Dash In’s expanded focus on working with communities where Dash In stores are located to help support outdoor spaces that are valued by the community and could benefit from renewal.

“At Dash In, we have taken time this past year to work with our parent company, the Wills Group, to address near-term needs during the pandemic with a big part of our commitment being more than $1.6 million in grants distributed to local food banks during the past 18 months,” said Julian B. (Blackie) Wills, III President and Chief Operating Officer of the Wills Group. “We’re proud of that commitment and we’re ready to do more. Outdoor spaces have emerged as an important resource for communities during the pandemic and at Dash In we’re going to work with communities to celebrate and improve those spaces.”

“We were very intentional about each of these locations,” added Wills. “For example, for the Clinton location, Dash In worked with the community to improve the intersection – that was really important to the local officials, and we think demonstrates Dash In’s commitment to being a meaningful community partner. Enhancing Outdoors Spaces is an important extension of Dash In’s intentions of working closely with all stakeholders across the communities we serve.”

Both Dash In grand openings featured five days of events that took place in September and October. Each event featured a presentation of the Dash In grants to local food banks, schools and nearby fire departments, with the Clinton grand opening being the first instance where Dash In was able to work with a local department of parks and recreation to contribute to improving a nearby Tanglewood Park.

About Dash In
Dash In, a Wills Group company, was born out of a desire to fuel the journeys of our neighbors through good food, warm smiles and giving back to our local communities. At Dash In, we’re on a mission to transform everyday errands to be more delicious, more delightful, and more rewarding. Serving customers at more than 50 locations throughout Maryland, Virginia, and Delaware, Dash In is a growing chain passionate about quality, innovation, cleanliness and our communities.